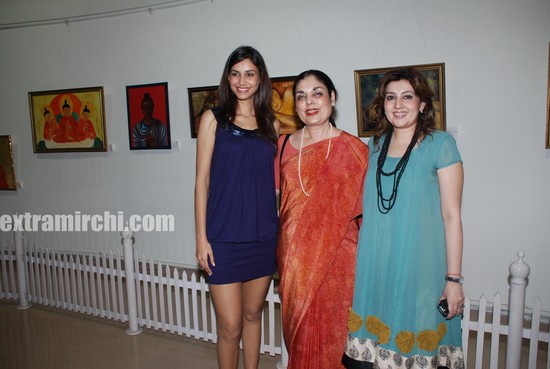 This exhibition could have been anywhere in the world; because the subjects had universal appeal and a historical context. Just as well that it was in India; Artiste Aruna Mascarenhas said, ” my preparation for this exhibition started on 26/11/08. Living within earshot of the incessant and unnerving sound of rifle shots and hand grenades, which I could see from my house, I sought refuge at the easel”

One of the paintings titled”The Inward gaze” was done precisely on that day. It represents a Buddha withdrawn deep into himself in search of peace.

Arunas mentor Rekha Shivdasani, and art lovers Maya Alagh, Archana Kochhar and actor Amruta Patki turned up to encourage her. The pricing of Arunas works came as a surprise, as Archana immediately picked up a floral painting. As she said; “i could not believe that the paintings were so well-priced; and I just had to buy one.” Amruta Patki, looking gorgeous in a blue dress; spoke about being a good art student in school and took her time admiring the works.

ABOUT THE SHOW ‘TRANQUIL SPACES’
The Buddha is revered across several South East Asian countries; There are historic artistic renditions from Nepal, Tibet, Cambodia, Thailand and Japan which have been recreated beautifully by artiste Aruna Mascarenhas. A total of 19 masterpieces ready to engulf your spirit with the pleasure of the Buddha’s learnings; juxtaposed with the pain of his renunciation.
In a very original concept; Aruna’s first exhibit is called ‘unshackling’, the act of Buddha actually giving up his possessions in quest of the truth. Done in an unusual purple hue; this captures the pained expression of the Buddha and his urgent need to answer the questions that are haunting him. Her monochromatic Kamakura Buddha is inspired from Japanese depictions of the Buddha, while the starved Sakhyamuni is again a Japanese sculpture of the 17th century housed in the British Museum. There’s a very unusual Jade Buddha emerging from the mists, gazing knowingly into the future; a very well crafted monochromatic illusionary piece. A 15th century bronze figure of a walking Buddha from Thailand is her next canvas and this walking form is revered even in Laos and Vietnam. Satori; the moment of enlightenment is captured in multiple but muted hues by the artiste…..the moment when everything fell in place and peace engulfed the Buddha.
The other oriental deities include Tara; a pre-eminent female figure in Buddhism, the Tibetan Goddess Vajravarahi, Shinto deities, Tantric panels, Ganesha a unique interpretation, The hagia Sophia Christ from the Istanbul museum and Madonna with child based on a Russian icon. The florals capture peonies, lavenders, quince, magnolia and lotuses; each of which havs symbolic significance in Oriental customs.

Erudite artist Aruna Mascarenhas is but a tender 62 years young! A retired Director from Air India, where she rose to the head the Planning & International Relations Department, she was on deputation to the International Air Transport Association (IATA) in Geneva as an economist.
Deeply interested in art, she pursued her passion for painting only upon her retirement from Air India, in a career spanning three decades. Her role afforded ample opportunities to visit the major art galleries around the world.She now says “painting has come to me as a form of meditation – of reaching deep within.”