Only two Indians have ever won an Oscar costume designer Bhanu Athaiya for Gandhi (1982) and arthouse director Satyajit Ray who received a lifetime achievement award in 1992. However, with three Academy Award nominations this year for Slumdog Millionaire one for overall score and for two songs Chennai-based composer A R Rahman looks likely to be the third. He’s also up for the Best Music award at Sunday night’s Baftas. 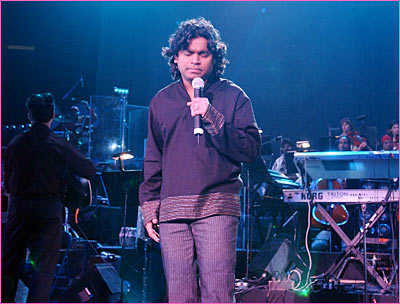 “We’ve been waiting for this for 80 years,” said Rahman recently in The Hindu, the Indian daily newspaper. “I think it will create a bridge between Western and Indian audiences, and lead to more people exploring Indian music.”

Rahman’s first breakthrough tune Chinna Chinna Aasai, in the 1992 film Roja was a song of a poor man dreaming of riches. Rahman’s family had struggled after his father. His father’s eclectic tastes was inherited by his son, who formed a rock band in his teens and studied Western classical music (at Trinity College in London) and Indian classical music.

“Compared with other Indian film composers, I only write about six movies a year. Others write up to 60,” he tells me in the unlikely setting of his house in Tufnell Park, where he lives when he is in London.

He’s already the first Indian national to pick up a Golden Globe (for Slumdog), and says: “I hope we get at least one [Oscar]. I cannot wait for the announcement.”

[ Interview with AR Rahman, the composer behind the Slumdog Millionaire soundtrack ]