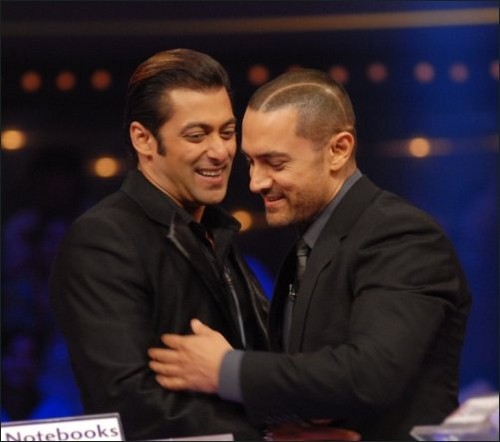 Aamir Khan and Salman Khan are spending a lot of time together these days. And Aamir has admitted to his friendship with Salman saying that they spend time together whenever they can.

The duo meets up at night whenever Kiran Rao, Aamir’s wife is away at their weekend home in Panchgani. Aamir sends all his staff, except his security staff, home by 9pm and then meets Salman at night. He parks his car in Salman’s Bandra home and then the two actors go riding on Salman’s bike. They then come back for a round of drinks, either at Salman’s place or at Aamir’s place, if Kiran is away. Aamir, who is currently dieting, binges when he’s drinking with Salman.

Aamir also holds special screenings of his films for Salman. He had held a preview of Ghajini for Sachin Tendulkar and Salman where the latter made some suggestions regarding the movie. The suggestions were taken into consideration.

This time too Aamir will hold a screening of 3 Idiots only for Salman after December 3rd, as Salman will be performing in a show in Dubai with Katrina Kaif, Neha Dhupia, etc. on December 2nd. Who knows? Maybe one of these days, Salman might hold a screening of Veer for Aamir.