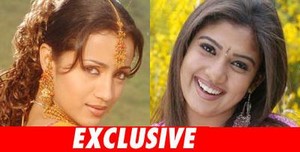 Trisha and Nayantara fans were in a huge disappointment, as none of their films did not make for this Deepavali. However, Asin and Shriya made a big cracking releases with Surya in Vel and Vijay in ATM respectively, which made a talk in film industray that who is going to be No 1: Asin or Shriya?

However, Trisha is presently busy in Ravi Teja?s Telugu flick and will be seen pairing with Vijay in Dharani?s Kuruvi soon. She is also simultaneously shooting for Radha Mohan?s Abhiyum Naanum. After which she is eagerly looking forward to Gautham Menon?s Chennaiyil Oru Mazhaikalam.

On the otherside Nayantara is currently involved in many projects like Billa, Yaaradi Nee Mohini with Dhanush and Sathyam with Vishal. She is a leading star in Telugu cinema.

Trisha & Nayantara will give couple of movies in 2008 for sure.