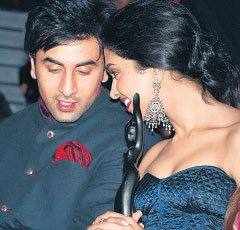 Ranbir proposed Deepika Padukone at the backstage of the Filmfare Awards 2007, Deepika immediately responded back by accepting his proposal, putting fullstops to Dhoni gossips.

They came closer during the shooting of Bachna Ae Haseenon in Australia. They also share a fabulous on-screen chemistry which is very much evident in the film. They too had a gala time shooting for the Pepsi ad.

Ranbir confirmed that wedding is still far away and both of them are concentrating on their career.