Here is the photographs of Nandana Sen who appeared on Man’s World. Nandana Sen (Nandana Dev Sen) is a Bollywood actress. Her father is Nobel Prize winning economist Amartya Sen and mother is Bengali writer Nabanita Dev Sen. She was born on 19 August, 1967 at Cambridge,MA, USA. 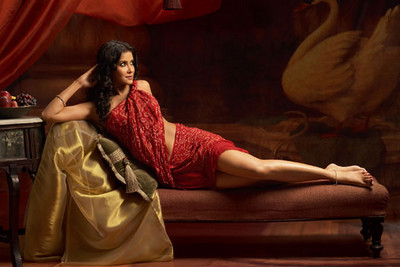 A sari can be a six-yard wrap, which hides a woman’s physical flaws. Or it can be a piece of fabric that reveals as much as it hides. On Nandana Sen, it just looks sizzling hot. Clad in an abbreviated version of a white sari with a gold border and with hair cascading down to her hips, she reminds us of the sexy Zeenat Aman in Raj Kapoor’s Satyam, Shivam, Sundaram.