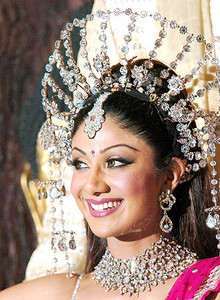 Shilpa was recently in London’s West End to promote the musical with her fellow cast members in tow. The all-dancing stage show premiered first in Germany and has since been on tour around the UK.

Shilpa Shetty has said that the response to her debut musical ‘Miss Bollywood‘ has been “fantastic” and tickets for the final show at the Royal Albert Hall on December 12 has almost been sold out.

Shilpa plays Maya, a native Indian dancer who decides to invest all of her savings into a Bollywood Dance Academy.

“It is truly my privilege and a great platform to showcase India’s culture,” said Shetty.

Miss Bollywood –Shilpa Shetty has been panned by critics. The Daily Mail called it an ‘ill-conceived, half-baked star vehicle.‘