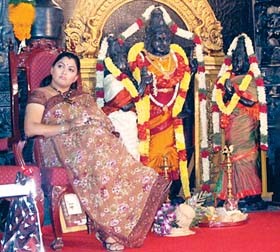 Actress Kushboo is in trouble again, well, this time for “wearing chappals” in front of idols of goddesses at a film pooja in Chennai recently. Surprisingly Tilagavathy IPS also was present at the event !

Gurumurthy, a Hindu Munnani activist, lodged a complaint before a civil court, alleging that Kushboo was seen sitting with her chappals in front of idols of goddeses-Lakshmi, the photos was published in a Tamil Weekly and her action had hurt the sentiments of the Hindus.

Here are the photos from the trouble inviting event?

He requested the court to take action for hurting religious sentiments.(under section 295 and 295(A) of the IPC ). After hearing the complaint the judge posted the case for December 3.

in 2005, Kushboo invited trouble from all quarters by her interview to a magazine over a survey on pre-marital sex, which invoked lot of protest from political parties and from feminist outfits.

Next post: Rajin’s “Sivaji–The Boss” to be shown on Singapore Airlines