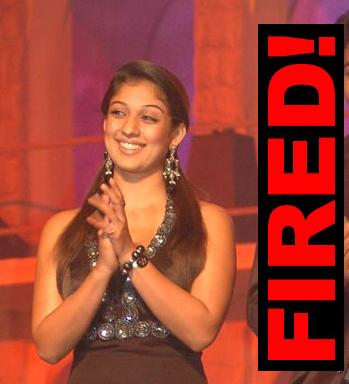 Twenty20 cricket team Chennai Super Kings – has terminated South Cinema?s numero-uno actress Nayanthara contract to be their brand ambassador for allegedly breaching the terms of her contract. The company has asked the actress to refund Rs.4 million( 40 lakhs) paid to her, legal action will be taken if she fails to comply.

Nayan suffered sunstroke and collapsed on the Kuselan movie sets and was not able to attend the previous Twenty20 match between Chennai Super Kings and Mumbai.

In an press release IPL?s Chennai Super Kings has said

As Nayanthara is unable to meet the commitments of regular match appearances, the team has now decided to go with a single star ambassador and from now Mr Vijay will be the sole brand ambassador for CSK. We are planning to shoot the promotional video with Vijay and Dhoni this week

According to reports spokesman of a leading event management company claimed that nayan ?fraudulently reported sick and admitting herself in a hospital? to stay away from the promotional video shoot.

I am shocked. I just can?t figure out what went wrong? I was unwell and helpless, advised by my doctor to take complete bed rest after I fainted on the sets due to low BP and heat.

Previous post: We will do a movie together, Jackie Chan tells Kamal and Bachchan