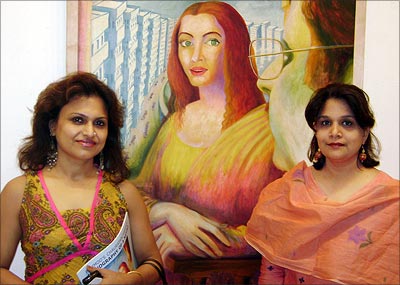 After a break of 9 long years,72-year-old Ratan Parimoo exhibited his first paintings in Jehangir art gallery,Mumbai. He adapted Mona Lisa as the archetypal female.

Mona Lisa – most famous painting in the world

Mona Lisa, or La Gioconda is a 16th-century portrait painted in oil on a poplar panel by Leonardo Da Vinci during the Italian Renaissance.

It is arguably the most famous painting in the world, and few other works of art have been subject to as much scrutiny, study, mythologizing and parody.

The painting was not well-known until the mid-19th century.