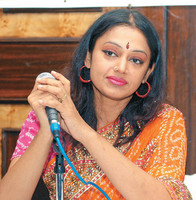 A two-time National Award winner actress , Shobana made her debut in Balachandra Menon’s blockbuster. Manichitrathazhu (Malayalam) and Mitr: My Friend (English) gave her National Award . Her legacy in films was handed down from her famous aunts, Lalitha, Padmini and Ragini.

Shobana belongs to rare gene of artistes who are both actor and dancer, like Kamala Hassan and vineeth.

Shobana , leading Bharatanatyam dancer and actress of South Indian motion pictures acted in over 150 movies in 5 language not yeat married. She performed in Kuala Lumpur before the King and Queen of Malaysia. In 2006 January, the Indian government honored Shobana with Padma Shri title for her significant contributions to cinema and Bharatanatyam.

According to sources Actress Shobana is in love with Rahul who is a native of jharkhand, a state in eastern India.