Vijay appears as Actor Vijay himself in Panthayam movie. Panthayam stars Nitin Sathya, Sindhu Tolani, Prakash Raj and Vijay in special appreance. Nitin acts as Vijay’s crazy fan who comes to his shooting spot as he gets into a problem. 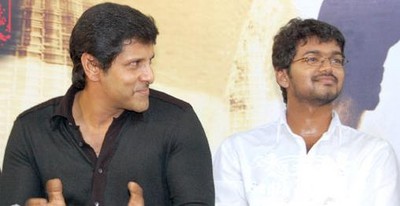 Considering what happened to Kuselan, Vijay has been kept low profile in Panthayam publicity. Vijay did not wanted to create huge expectations with his fans like kuselan, so he did not even attend the audio launch of film which is directed by his father S.A. Chandrasekar.

Producer of Panthayam decided not to release the stills of Vijay to the press, because it will create huge expectations among Vijay’s fans. Distributors have been advised not to sell the film to theatres saying it is a Vijay film.

Next post: MohanLal says – Rajini Fans Did Not Accept Guest Role in Kuselan