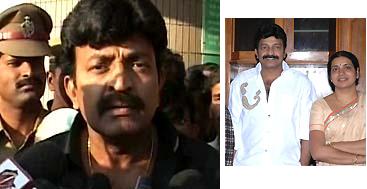 Telugu actor Rajasekhar, his actress-wife Jeevitha and their two daughters were attacked by fans of superstar Chiranjeevi at Punjagutta, Hyderabad.

The attackers came in 4 cars and chased Rajasekhar’s vehicle when the Rajasekhar’s family was on their way home from the railway station.

They protesters shouted slogans against the doctor-turned-actor for making critical comments against Chiranjeevi, and demanded an apology.

The controversy broke out following Rajasekhar’s remark during a press conference in West Godavari district on Sunday that Chiranjeevi lacked political experience and that he would not join his party if and when it is floated.

When newsmen asked him if he would join Chiranjeevi’s political party, Rajasekhar replied, “I will not join his party. Chiru has no political experience.“