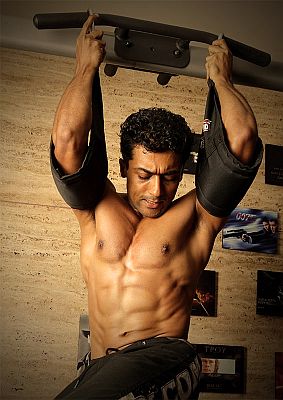 Actor Surya is building himself for his release Vaaranam Aayiram directed by Gautham Menon. Surya began working out for 8 months under the strict supervision of a skilled trainer as the movie spans surya from age 17 to 65 years. The result is a Surya with six pack abs.

It will take dedication, willpower, patience and time to get a six pack but in the end, the effort is well worth it. Shah Rukh Khan had managed to do the same for a song in ‘Om Shanti Om’ (OSO).

Surya, the first hero in Kollywood to train hard and achieve the six pack abs.

Next post: Ban on director Samy revoked for slapping Padmapriya