Rajini Speaks up on Apology – Nothing more to the Speculation

While, Bharathiraja and controversy queen Khushboo said that superstar has done for the welfare of film producers. 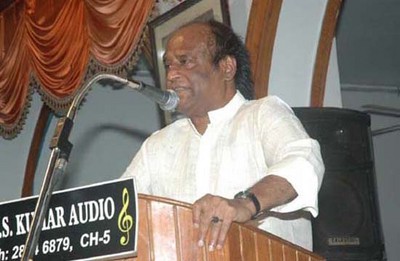 Rajini at a press meet in connection with honouring of technicians involved in Kuselan, on Saturday, Said

I don’t want to add anything more to the speculation. When I said we have to kick (udaikkanum) those in Karnataka opposing supply of water to Tamil Nadu, I was referring to those who indulged in violence and not everyone in general. Yes, I should have been more specific. I should have clarified this matter on the stage that day itself.

I have been quoted as saying that I have learnt my lesson. Well, life is all about learning.

Rajini only said that if his words had hurt anyone he regrets having said that (varundugiren). He has nowhere used the word “mannippu” (apology). Please don’t read between the lines.

At a time when Tamil technicians were making a mark in Bollywood and when Tamil cinema was receiving attention from all over the world, there should be no split in the film fraternity.