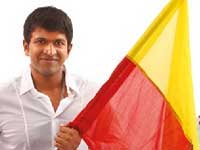 Even though Puneet Rajkumar‘s Raaj– The Showman didn’t do wonders at the box office, unlike some people’s claim, he has still been offered Rs. 2.07 crores by the producer of Prithvi. That makes him the highest paid Kannada star. Way to go, Puneet!

Rajkumar’s is the youngest son of Kannada superstar Dr Rajkumar.

Director Jacob Varghese’s Prithvi was launched recently at the Someshwar Temple. The event was attended by a lot of people from the industry. The film stars Puneet Rajkumar and Parvathy Menon. Puneet feels that the movie will do well with younger audiences as it has all the elements that will appeal to them. He wanted to work with Jacob ever since he saw Jacob’s Savari.