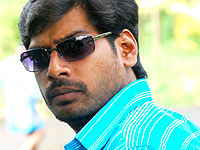 Nithin Sathya who did character in ‘Chennai 28’ has been signed for a film with ?S? pictures of director Shankar.

Prithviraj and Padmapriya starred “Satham Podadhey”, too won him a good name in which he played a character with a negative shade. At first he appread in Kamal Hassan’s Vasool Raja M.B.B.S and debuted as the lead hero with, Chennai 600028.