Telugu Megastar Chiranjeevi (53) announced on Tuesday at an informal gathering of a few select reporters that he will launch a political party soon. Chiranjeevi indicated that he would announce the party after August 15 through a media conference and there would a public meeting in Hyderabad and Tirupati after that.

Speculations were on for several months that Chiranjeevi would launch a political party. His move could change the political equations in Andhra pradesh. 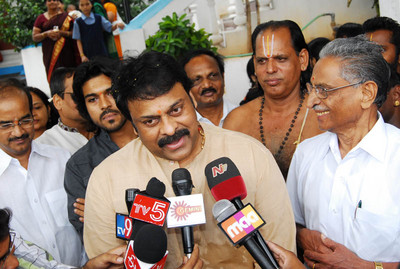 “After August 15, the announcement will be made,” the star said. Talking to a few mediapersons at his film production office in Jubilee Hills, Chiranjeevi was confident that his party will win 225 seats on its own in the General elections. He said that the media speculations about his political career since 1999 made him consider entering politics.”