To end his political entry speculations , Telugu megastar Chiranjeevi inaugurated his party office on Aug 10th Sunday midnight, along with his his family members in the posh Jubilee Hills area of Hyderabad. Special poojas were performed. He formally inaugurated the new office at the early hours of Monday at 12.20 am. 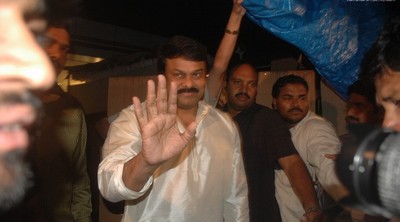 After the inauguration Chiranjeevi said

I would be announcing my party and agenda and officially launch the party this month. I will be answering all the questions posed by the media on the day of my party announcement.

He is likely to launch the party at a massive public meeting in the temple town of Tirupati on Aug 22, his birthday. The assembly elections for Andhra Pradesh are due in March next year.