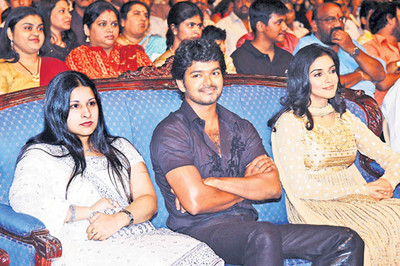 He is commonly referred as Ilaya Thalapathy (which means “Young General”) by his fans. Nowadays he has more or equal fan base compared to superstar Rajinikanth in tamil nadu. Vijay is the star ambassador for IPL Chennai Super Kings cricket team.

His first lead role was in his father’s film Naalaya Theerpu in 1992 — no one noticed him at that time and imagined that this boy would become one of the box office king in Tamil Nadu. In the year 1996 Vijay gave his first blockbuster movie Poove Unakkaga directed by Vikraman.

Vijay’s romantic comedies and his dance abilities were very well being recognized. Vijay is one of the few lead actors of his generation to share the screen with veteran actor Sivaji Ganesan in the film Once More directed by his father.

Vijay married Sangeetha in 1999 and is blessed with a son Jason Sanjay and daughter Divya Sasha. Today, Vijay is one of the industry’s most popular stars and box office king — less or equal he can be compared with superstar RajiniKanth.

We wish the star happy birthday on behalf of extramirchi.com fans.