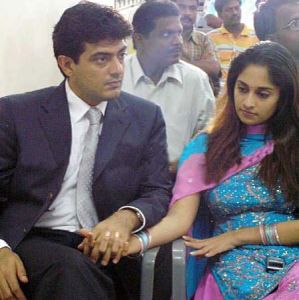 Ajith Kumar smartest and rare breed of actor who is more dedicated and hard worker in Indian Cinema, widely known as Ultimate Star or Thala celebrates his birthday today- May 1 (turns 37 today).

Ajith starred in few advertisements before he got the chance to act in films. He made his acting debut in the film Prema Pustagam (Telugu) in 1992 — followed by a Tamil film Amaravathi in the following year, his first lead role.

In addition to being an actor, Ajith is a race driver, having driven in Formula Three for a season and an active ambassador for the Green Revolution.

He married to his Amarkalam movie co-star Shalini in 2000. On January 3rd , 2008, the couple were blessed with a baby girl, Anoushka.

We wish the star happy birthday on behalf of extramirchi Fans!