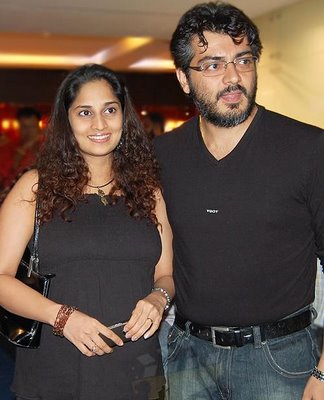 It’s official, Ultimate star Ajith and Shalini, one of the most beautiful couple of Tamil filmdom, finally announced the name of his baby girl yesterday at a simple function held at his Thriuvanmiyur residence amidst his close relatives and friends.

The name is Anoushka, a Sanskrit word, which means ‘one who fulfills aspires and dreams’.

Shalini delivered Anoushka in a cesarean surgery in Chennai Apollo Hospital on January, 03 2008.

Meanwhile, Ajith is busy shooting for Aegan, his next venture directed by choreographer Raju Sundaram.